↓ Skip to Main Content
Home › Uncategorized › Think Outside the Lockbox

Think Outside the Lockbox

Everybody knows how to raise children, except the people who have them.
~P. J. O’Rourke

Those of you who know me know that I am the father of four fantastic kids.  You also know that I, like you, have had great and not-so-great parenting moments.  As an educator, I have always said that I am awesome at raising other people’s kids. As a parent, I’m a bit more hit or miss.  The purpose of this blog is to communicate the great things that are happening at our schools and to provide support to parents as they raise their kids.  This post is less about the schools and more about a personal experience I recently had with my kids.

My kids’ school district has implemented a K-8 one-to-one initiative.  That means that my first graders (Jayden and Noah), my second grader (Jack) and my sixth grader (Ella) all have school-provided devices.  In addition to these devices, we also have two laptops, two iPads, several deactivated iPhones, and my daughter’s cell phone.  Suffice to say, we are a highly connected household.  At the beginning of the school year, we found the device management fairly easy.  The kids all had a “spot” for their device and were responsible for charging and storing it each night.

However, after a couple of months, we began to notice non-school apps showing up on the devices as well as silly pictures that had nothing to do with school.  Our kids were using their devices for non-school purposes.  At its worst, my kids were getting up in the middle of the night to “play” with their devices and/or watch videos.  Being the good parents that my wife and I are, we decided to store the devices in our bedroom.  We figured surely that would put an end to these hijinx.  We were wrong.  Our kids were soon creeping into our room (ninja style) and sneaking their devices.  At my wits’ end, I had to get creative.

I went to Office Depot and bought a large lockbox.  I drilled a hole in the back and secured a multi-plug power strip inside.  Each night, as part of our nightly routine, the kids check in their devices and they (the devices, not the kids) are locked in the lockbox (see below).  So far, this intervention has worked well, and we’ve only had one breech.  It may seem extreme, but it has been very effective in helping my kids disconnect.

I work with parents every day who are struggling with similar issues.  My point is that we need to work hard and think creatively to help our kids set limits.  Many of our kids are not able to set these limits for themselves.  In the end, I am sure that I will have awesome “lockbox” stories to tell at their weddings. 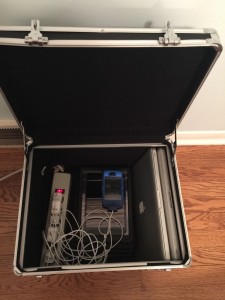